We recently provided some sizable VFC’s on a project replacing some old SCR (six-step) controllers that we had sold to the customer about 20 years ago. They are currently running a couple of the units and the customer has commented about the noise coming from the motors.


The old six step drives, being a variable bus-SCR based controller, induces no real audible noise on the motor. The controllers of today, being a fixed-bus type controller, induce noise generated by the carrier frequency used for the rate of firing of the IGBT’s. This noise is a ring that is very pronounced especially when the carrier is set to low frequencies and is (in some applications) very annoying.

Most manufacturers of Variable Frequency Controllers today have an adjustable carrier that can be programmed to different frequencies. These are generally from 2 kHz up to 16 kHz. Usually when you program the carrier of a controller above 10 kHz, the audible noise seems to disappear. Honestly, it does not go away but rather is moved now into a range that is undetectable by us lowly humans.

When you program a controller’s carrier frequency above 4 kHz, you now need to start de-rating the unit. Why do I say, “start to de-rate”. Mainly because there is a point to where the controller gets into trouble at any given carrier setting above 4 kHz. Where that percent of speed/current de-rate crossover is depends on the setting and size of the unit. The higher the carrier setting, the larger the de-rate is. This also means that the unit will get into a critical current issue lower in its speed range and will reach maximum operating current at a very much-reduced frequency.

I cannot give you specific numbers on the de-rating. Each manufacturer has their own numbers on this and can usually be found in their literature if one looks hard enough. Know this, some manufacturers are worse than others because their VFC’s are produced on the ragged edge of the nameplate rating to begin with so shop carefully if you are looking for a controller that will have the capabilities of higher carrier operation.

I thought I had better add one more statement to this.  Even though there is noise coming from the motor, this noise being generated by the lower carrier is not detrimental to the motor.  At least it is not near as harmful as the higher carrier settings can be.  Higher carrier frequencies generate not only spikes to the motor, but the higher "ring" caused by the speed of the carrier causes the motor to electrically viberate and will cause premature failure of the insulation and will eventually lead to failure.  The higher the carrier, the worse it is on the motor, but if that makes us feel better in the long run....do what makes you feel good.  Motors are cheap to replace, right?

Just though you may want to know,

Scott
Posted by Scott Gordon at 3:05 PM No comments:

Our shop is full

It is a good thing to have backlog in the shop. We are currently on schedule for most all projects but the shop is very busy. We are working on several different projects for multiple customers and Zach and Brandan have their hands full.

We just finished a couple of starter panels for a customer near the western state line.
Below are a couple of photos of them. 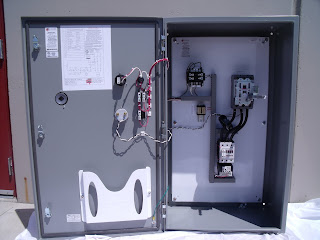 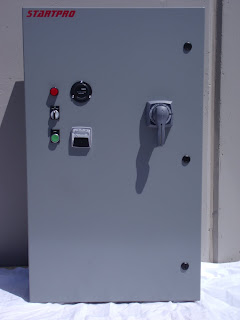 These are actually some of our Pumpro products but as you can see, in our haste we put the Startpro labels on them. They were corrected prior to being shipped out to the customer. These are available in many configurations and in a wide range of horsepower. Please call us for one (or more) to suit your application needs.

Our salesperson from the Phoenix area, Jim Esneault has been in town for the past few days helping spread the word about our Swivelpole line of products. If you don’t know what these are, contact us and we will be happy to send you some literature on this line or you can just see it on the website. It’s a great product and we are starting to see some orders for them.

In a few weeks it is time for the Elko Mining Expo.  This is always a great time in the area of the Humboldt River and I hear the Halibut is fantastic (just a joke).  For some of you, we’ll see you there.

Scott
Posted by Scott Gordon at 11:27 AM No comments:

Just a quick note about some of the most mean, strong, stealth, loyal, trustworthy, talented, giving and honorable men in our armed forces…..the Navy Seals,
Way to go guys!   YOU ALL ROCK!  Not just now but all the time for doing things to keep us safe that I really don't care to know about other than you are doing them for our protection and way of life.

Thank you.
Posted by Scott Gordon at 12:01 PM No comments: