Well, here it is in original form.  A Buell Blast 500cc, 4 stroke motorcycle.  This little girl is what most call "a half a Harley".  It is perfect for what we are going after.

It will soon go on a serious diet and become a lot lighter than its current weight of 360 lbs.  I have a mess of various parts to begin doing a few things to it but the first thing is to form a game plan for the class we are determined to go after.  I know most of what we will need to make this thing into the beast we are wanting and have a preliminary budget set that is pretty tight. 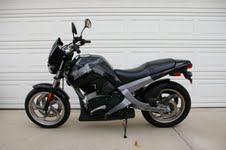 I will continue to post progress pictures as we go along.
Posted by Scott Gordon at 2:40 PM No comments:

October thoughts and a goal for next year

As most of you may know, one of my pastimes is working on motorcycles. I usually have a project sitting on the lift at the house most of the time. I am currently finishing up a 1952 45-inch solo that I am preparing for an auction this January.


I have had a passion for motorcycles since the age of 11 when I was given one by my dad. Since that point, I have had numerous brands, types and sizes of them but for the past 16 years I have mainly spent my time with Harley-Davidsons. Zachary, Brandan and I built a chopper back in 2006 that I took to the Sturgis Motorcycle Rally in South Dakota. That was a memorable experience for the boys and me. Four months of solid work in the shop at home and a lot of figuring and learning along the way.

On a recent trip to Wendover, Tammy and I stayed the night at a motel on the eastern edge of the town. The parking lot was full of people there for the speed finals at Bonneville. Being me, I talked to quite a few of these folks and found that they have the same blood pumping in them as I do in me for the love of anything powered by an internal combustion engine and the want to make it not only look good but Go Fast!

So, here’s the deal. I have a motorcycle that is going to become a project/representative for the company over the next 10 months. We intend to build a machine (in our off time) that we can go after a land speed record with next year. I have set a tight budget and we are going to limit ourselves to a 500cc class.

Some of you may be saying to yourselves, “What does this have to do with E.C.T.?” Everything! We pride ourselves in being able to solve problems, be creative, and achieve greater heights than our competitors can. So why not think outside the box?

I will be posting some pictures and notes as we get started on this “Run for the Salt 2011”. All along the way, we will give progress reports and post build pictures so you can follow along. This will be fun for us and I hope for you as well.

Scott
Posted by Scott Gordon at 12:29 PM No comments:

We recently took a trip out to see some folks that we have been building some panels for in the west desert of Utah. The operation is Desert Hawk Gold in Gold Hill, Utah.


This location has been mined (off and on) for over one hundred years and was primarily an arsenic mining site. At one time there were over 3000 people living and working in Gold Hill. A rail line was even run into town at the height of the operation I believe in the 40’s.

Today, there are a few residences in Gold Hill. There are only a handful of people that live there. The mill (located just a short distance from town) is being refurbished for gold recovery. Several people working there are friends that are retired from other gold operations in Nevada. We have known these folks for a long time and we are doing our part to try to help them get things together so they can start producing from a quarry they have several miles from the mill.

Prospects look good and at the price of today’s gold, it should work out to be a successful operation. Tammy took some goodies out to the mill and we were glad to be greeted as the first vendors to visit the site.

Upon leaving, we decided to come home via the old Pony Express route. I had not been across this road since I was in my teens and it was quite a trip. My youngest son and I had antelope tags for that week in the area so we did some scouting on the way. Later that week, my son and I filled our tags in the Simpson Springs area. It was a great hunt. 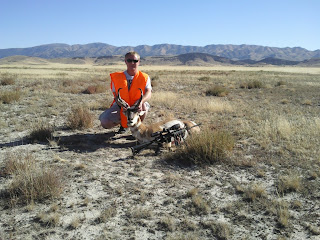 Scott
Posted by Scott Gordon at 2:32 PM No comments: