Last week was again time for the Elko Mining Expo in Elko, Nevada.  There were a lot of vendors at this years event, more than I think I have seen in the past.  The weather was not the best as it was cold in the mornings and the wind really kicked up on Friday afternoon causing some to tear down and run out early.

We had the opportunity to visit with several people that we only see during this event and many that we get to talk to and see during the course of the year.  Newmont had their "chopper" on the main stage of the convention center that was built for them by Paul Jr. Design.  It was quite an interesting piece of work and many different aspects of the mining operations were incorporated in the build.

It seemed that the weather kept the attendance down as there just were not as many people there as there has been in the past which made it a bit slow but non-the-less, generally a good time for visiting with many folks we look forward to seeing at this event. 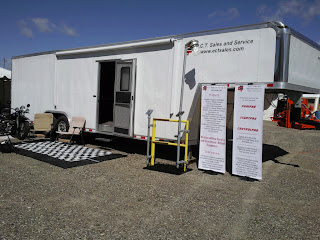 This is a picture from last years show but it pretty much looked the same this year.